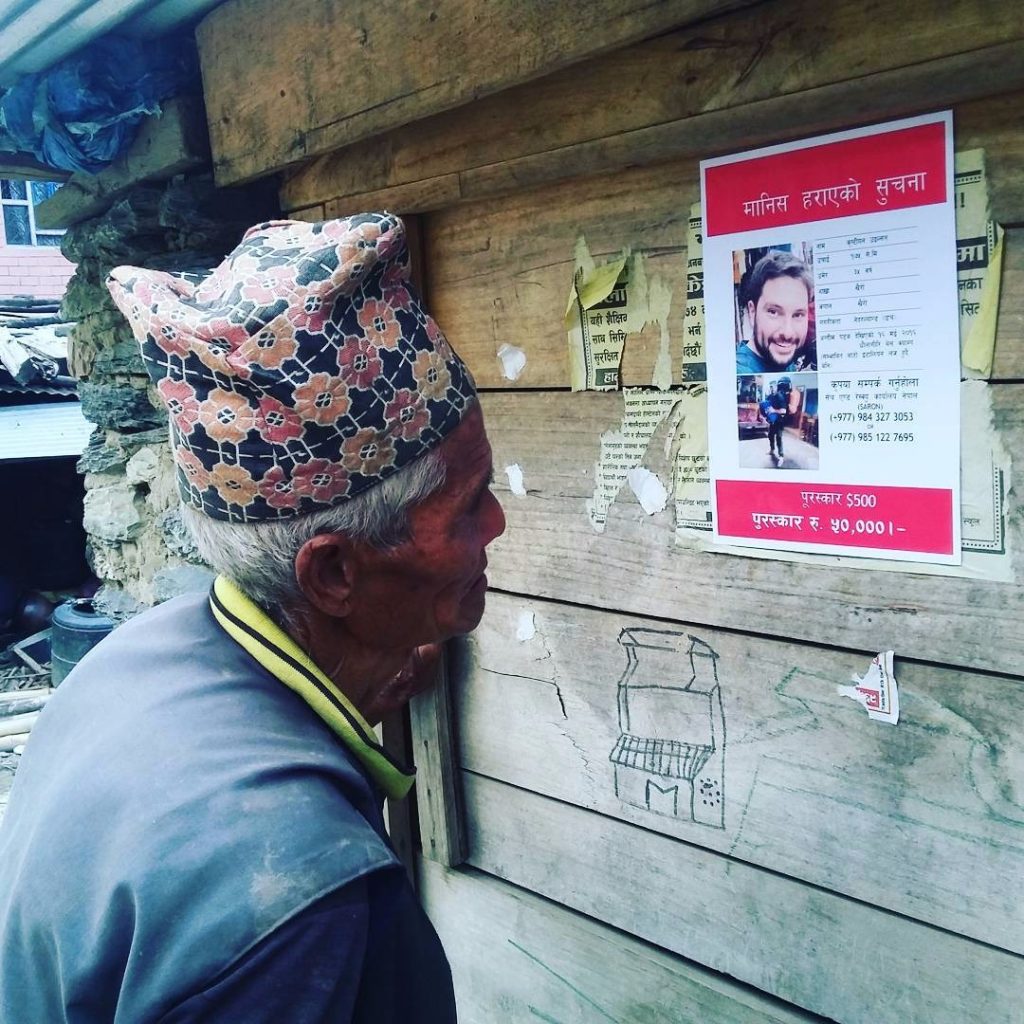 We are meeting each other at the Yak hotel in Beni. Ruben has gone to meet Paul this morning and I expect them to arrive along with two guys from Sardog. John and Ben are coming from Tukuche. They went to the army in Jomsom yesterday and have spent the night at Patrick from Dutch Bakery in Tukuche. They will be arriving shortly as well. For the first time, all five will be in one hotel. I am looking forward to this and can’t wait to hear their stories.

Flyers in hand and with the taxi driver’s help, who spoke some English, we stopped at every house, in every hamlet and at every village.
“This is our friend, he is missing. Have you seen him? Can we leave a flyer here?”

We received all the cooperation the local people had to offer. They listened intently and discussed things among themselves. Sometimes, we were redirected to other people. We were allowed to post flyers nearly everywhere. At hospitals and police stations, at the place where people meet in the village (often a tree) and at tourist checkpoints or in the local buses. Sometimes people would think they recognized Christiaan, giving us hope. Each time, the track led to a dead end…

The situation is known in the valley. Thank you, Karna and his colleagues at Sardog. Thank you, Facebook.

The search in Nepal brought together hope and despair. But in a weird way also a privileged knowing.
Privileged to know Christiaan as a friend.
Privileged to be doing this with so many people.

For that reason, Christiaan!
Christiaan, thank you!

The past few weeks Paul together with a big group of friends searched for Christiaan in Nepal. He wrote the following message after his search.

Dear friends, the feelings I have about being back are mixed. I wanted to bring Chris back to us, to not leave Nepal without him. To bring my good friend back, plan new things with him. But here I am again, without Chris.
Only a small piece of orange helmet gave me the sudden hope that Chris was close. I got scared. Hadn’t I seen Chris with one of those helmets on one of our trips? In the area where he had walked, by the river, on the ice berg, I often felt him so close. But no matter how hard I looked , I never found him. I searched along the river but after the twelfth time I slowly started finding the same plastic scraps, the same candy wrappers and strange stones as the previous times. How could I find all these small useless things but I couldn’t find Chris, his bag, his sleeping bag?
So many scenes played in my mind, I have to get a grip, what’s the most logical? Chris, where have you walked, which choices did you make, which choice would I make? Where could you have slipped, where was there a rockfall, were there any crevices, where could you have landed in the river? From simple to extreme illogical paths entering the valley, we searched. No matter how many times we searched the river, under, next to and past the rocks, I found no further signs of Chris. Even the various teams with which I climbed up didn’t know where to look anymore. Everything between Daulagiri base-camp and Italian base-camp had been searched many times. The whole valley to the road had been walked, all the villages visited…
In that aspect, I feel a little at peace, the luxury of having seen with my own eyes that with so many hands and eyes, at this moment, he could not be found.
Thankfully, most hands and eyes are not back in Holland, but still there. The local residents in the whole area know about Chris. They have promised to call us or the police with any new sign or indication of him. They will be there the following week, month, year and know about our situation in the case that something is found or maybe even if a Chris comes by the village one day.
Without the endless effort and support of our family and friends back home and the financial support we would have never been able to organize a search such as this one in Nepal. Without the local support of Ruben, Felix, Ben, John, Pieter, Sander, Michel, HP, all contacts and organizations in Nepal, I would have never climbed that mountain and there would not be any flyers or info about our Chris in that whole region in Nepal.
I went to Nepal because I know that Chris would have done the exact same for me. That Chris would have forgotten time and expense to find me. It was Chris himself who taught me many things that I unexpectedly turned out needing these past weeks in the search of my good friend.
I am very sad not to have Chris in my arms, but I feel happy and privileged that I was allowed and able to search for him.
I wish everyone, especially Margreet, Pieter and especially Christiaan himself much strength.

Today we’ve received confirmation of the following: Paul found a piece of an orange helmet between Basecamp and Italian Camp, near a riverbed (Petzl Sirocco helmet). This is a fairly new type of helmet that we’re quite certain Christiaan had with him. It’s a tangible clue that could help our search. Paul is on his way down. Tomorrow we’ll focus on how we’re going to continue the search, and a few people will keep studying the satellite images.